"Swiss born, Dubai based artist Stefania Nazzal constructs vibrant rainbows that emulate her first encounter with a rainbow. Symbolizing hope and the transience of life, the rainbow becomes her tool to manipulate the spectrum of light, seeking to evoke the same hopeful and magical feelings that remain associated with her fond memories of a childhood escape.

As a child, Nazzal escaped the world through color. An encounter with a rainbow offered her a moment of magic that she extended through the activity of coloring, a contemplative process that she has brought to her practice. Her bold use of color recreates her magical escape, capturing the transient experience of a rainbow in a magnificent, fixed form.

Stefania Nazzal’s artistic practice is an exercise in breaking through her notions of perfection. In a meticulous process, for each work, she begins by

planning a base layer, mapping out the grid of colored PVC strings that wrap around her canvases. She then builds on additional layers, improvising the color scheme for the second and third layers, beyond the initially planned base. Through a process of repetition, Nazzal’s work becomes meditative, offering an escape from the world in both the process of creation and her resulting organized whimsical colorscapes.

For Nazzal, constructing these refractions of light evokes the energy of a rainbow. The seven visible colors of a rainbow are in fact different frequencies or energy levels of sunlight reflected through color, while each color is associated with a specific type of energy and state of wellbeing. This spectrum of colors corresponds to the body’s energy centers, with each chakra, associated to a specific color. Nazzal amplifies the energy of a rainbow by a gesture of multiplication and scale, reproducing variations of rainbows in multiple color schemes and various dimensions, each evoking a particular positive energy.

Music, to Nazzal, like rainbows, has always represented an escape, permitting

her the ability to freeze time. In her studio, Nazzal often works to loud music, finding refuge in her meditative practice, and the rhythm found in both her chosen soundtrack as well as her work.

This is perhaps best reflected in her Rainfall series, for which she cites rainbows and music as her direct sources of inspiration. To Nazzal, rainbows can neither be owned nor reached, and can never be contained. She describes her feelings encountering a rainbow, “within seconds of seeing one, even to this day, it is just magical. An instant inner peace and ultimate comfort of hope. Unfortunately, these moments never last and fade quickly like an illusion.” Nazzal seeks to capture this elusive moment in her works, recreating moments of escape that evoke a positive, hopeful energy, and capturing the energy of a rainbow for safekeeping.

In addition to this conceptual process, Stefania has sought to capture this moment through her writing. In a series of poems written in varying lengths titled Somewhere, Nazzal describes her perception of her very first encounter with a rainbow from her unique point of view. Nazzal incorporates layers of this text

in block print engraved in plexiglass over her masterful rainbow colorscapes in multiple works in both her Spectrum and Ombré series, creating another dimension to these works. Her use of text establishes a conversation with her audience and offers an invitation to consider her call to magic and fantasy, bolstered by her bright, colorful rainbow backdrops.

Throughout her practice, Nazzal continues to experiment with different mediums. Her primary medium of choice is PVC, for the sculptural quality and pristine shine that it offers her works. Her use of PVC also has a sustainability objective, by repurposing PVC materials that would otherwise be harmful to the environment, Nazzal creates permanent works of art that give life to an otherwise disposable material. As her practice evolves, she continues to introduce different mediums, building on her layers of PVC strings with paint, spray paint, sprinklings of diamond dust, as well as casing her works in plexiglass. 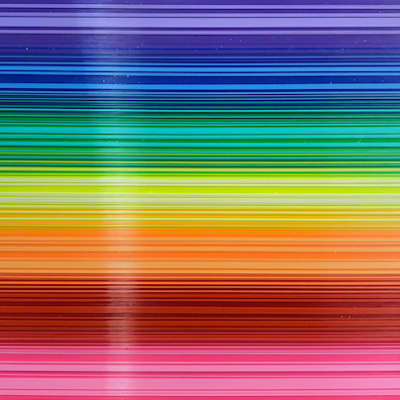 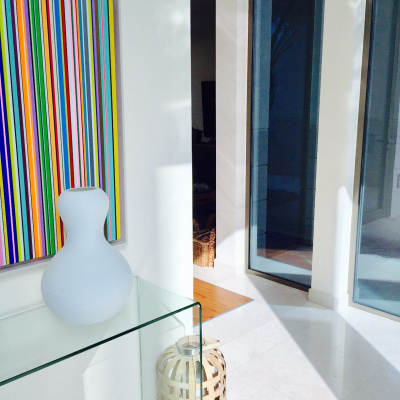 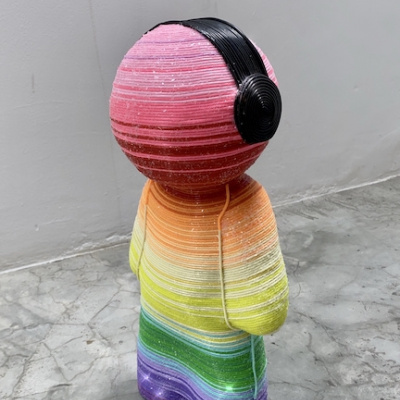