Born in 1971 in San Bernardino, California and raised in the Atlanta area, Craig first recognized his creative drive via crayons on his parents' walls, like many inspired young artists, and by the age of 7 his capacity for detailed visual interpretation became undeniable. After excelling in an introductory drawing class in school, Craig continued to develop technically and conceptually through his own diligent studies while always planning to pursue a formal art education.

He accepted a soccer scholarship at the University of Mobile, AL along with 3 summer art classes and in the first, Pottery, Craig's light bulb switched on in a rejuvenating glow. Learning became enjoyable from that point forward in his life and he was immediately thrust into the scholastic limelight. To help sustain his education he found financial support and enjoyment in driving to New Orleans on his weekends and creating portraits for passersby on the streets, with original rates that baffle today, at $15 for charcoal and $30 for watercolor. This endeavor helped him perfect his flair for replicating the human figure and afforded the budding artist a sense of economic autonomy. With a focus on studio art, his minor concentration in theater further diversified Craig's craft and armed him with additional techniques in makeup and set design. This blending of disparate influences and media is visually apparent in all of Craig's works, which demonstrate a broad knowledge and appreciation of the human form as well as the colorful world these beings occupy. Craig earned an area award for academic excellence and the university's most prestigious exhibition, "Art with a Southern Drawl," featured 1 of Craig's pieces, out of 42 chosen from a field of more than 1,600 submissions.

He learned how to frame art while working in a small frame shop part time while he was a student and a few months later his coworker pointed him in the direction of Deljou in Atlanta. He was hired and remained in framing for 4 years after pioneering the department's establishment before he realigned with his passion of art and joined the league of other artists in the art studio.

In his prolific career is a culmination of textbook artistic knowledge and keen aesthetic sense that has gone from a "slow and studied" application to "fast and free of precise thought". Craig's collections run the gamut from abstract expressionism to haunting, graphic realism, each one a reflection of its creator's unique vision. He is most well-known for his Populus series, which drew inspiration from a balcony overlooking Orange Beach, Alabama where patrons enjoying a wedding party seemed to form the shape of an eye where they stood. Craig explains, "Inspiration begins with a 'What if...' as I consider alternate imagery, surfaces, effects, results, etc. It comes from the past in conjunction with now. Like a bolt of lightning." Since the epiphany, his Populus series is now home to dozens of celebrities and icons of all ages including: Marilyn Monroe, Elvis Presley, Frank Sinatra, Freddie Mercury, James Bond, Salvador Dali, Pablo Picasso, Van Gough, Gandhi, James Dean, Lady Justice, John Lennon, Queen Elizabeth, Darth Vader, Michael Jackson, Audrey Hepburn, and many more. 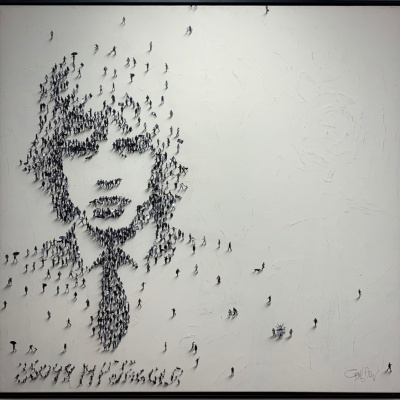 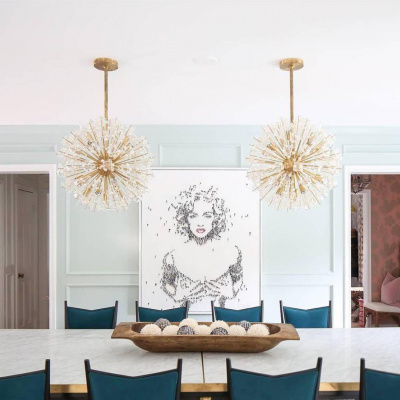