“As I paint, my intention is not to put bodies onto a canvas, but rather to let them emerge from it. Starting from total darkness, I slowly bring them to light - enough to begin to see their shapes and contours while remaining partially hidden. It is what we do not see that keeps us searching for more.”

Brian Atchley fell into painting when he discovered an abandoned canvas in a Chicago dumpster. He prefers the process of learning through doing, rather than through prescriptive art classes. Unlike classically trained painters who move from analog to digital, Brian moves in the opposite direction. As he paints, he starts with a base layer of shapes, letting it dry, then moves to the next consecutive layer with subtly more detail than the last. Working in Photoshop and thinking of an image as a stacking of multiple “layers” directly informs how he conceives the painting process.

His most formative experiences come from the darkroom, learning the power of composition, contrast filtering, and using shadow and light judiciously. The “Tobias & Stanley” series features larger-than-life hyper-realistic portraits painted with only black and white paint. His use of monochrome is meant to punctuate the incongruous textures of the human body and the profound effect light and shadow have in sculpting it. These sensibilities are directly channeled through his years of experience and exploration in a darkroom.

Brian’s most recent collection of work, the “Suspension Series,” depicts dynamic poses of men and women in the nude suspended in mid-air by bands of latex. Working for many years as an agency producer led Brian to observe the stark contradiction in the way images are produced and consumed. Although magazines present models posing flawlessly and seemingly candid, the photographic process is fraught with tension, manipulation and pain. Atchley’s work explores the idea that often, the most beautiful poses are those that are most contrived: friction between choreographer and dancer, coach and athlete, photographer and model. With every movement consumed by a spectator, there lies a power imbalance between the person we see “doing” and the director telling her what to do. The “Suspension Series” attempts to obfuscate the extent to which a performer’s ability to move freely is indeed hers. It poses the question; when we perform, are we truly the artist or the art itself?

The Suspension Series first previewed in Vogelsang Gallery in Brussels, Belgium as part of a four-day art fair meant to present strictly American artists to European collectors. The works are still in progress and due for completion at the end of September 2021. 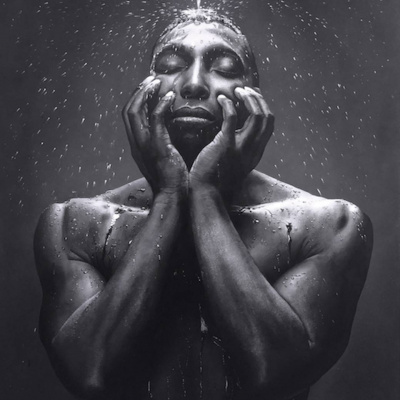 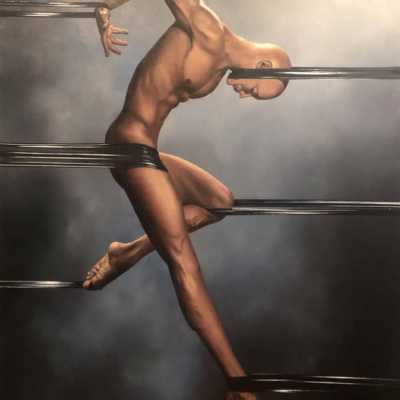