A Window Into Your Soul. Symbols that provoke curiosity, messages that promote thought and equations that signify the complexities of the inner heart. Such is the compelling swirl of paintings, sculptures and concept pieces emerging from the studio of L.A.-based Brendan Murphy. Charged with color and immediacy, his work explores the abstruse nature of the human spectrum of emotion--musing on everything from fear and uncertainty to the random and sometimes nonsensical decisions of the heart—demanding an awareness and dialogue with viewers. Mentored under iconic New York painters Eric Fischl, David Salle and Ross Bleckner, with celebrity fans like Serena Williams, Rafael Nadal and Novak Djokovik and pieces represented in over 600 private collections and at every major art fair, Murphy is one to watch.

Fresh over a major solo show in London last year, this is an artist currently entering new heights of his creative power, with works that read like a book into the inner workings of anyone who is fortunate enough to stand face to face with his captivating series. With a potential and drive that is limitless, Murphy invites collectors to delve further into the inner workings of their mind and find themselves within each of his pieces. And in a post-COVID-19 world, where connection is craved and emotions are explosive, his is a voice poised to resonate even more profoundly.

Think of the movie A Beautiful Mind for a glimpse into Murphy’s own brain and process. The artist predominantly uses symbols, shapes, and words to fill vast surface areas, for an abstract effect that’s science class chalkboard meets Jean-Michel Basquiat canvas. The writing in his works is pointedly haphazard and littered with everything from lyrics to words like love, lust, and passion. By design, it not only provokes a visual conversation on sight but prompts a deeper gut check too.

Murphy uses a wide range of impactful materials, tools and a patent-protected chroming technique to create his range of work. His spacemen sculptures and some of his fingerprint paintings, when crafted using a reflective silver-based chrome, cause viewers to quite literally confront themselves while gazing at his work. The spaceman, according to Murphy, is the embodiment of the human desire to look ahead and venture beyond boundaries, to step into the unknown and be present in the moment—to Murphy, that’s the purest form of existence. He’s continually inspired by the interplay of beauty, power and the human need to understand the energies of life.

“Inspiration for my work is exploring how we process emotions, the internal struggle that’s shared by everyone,” says Murphy. “Landing on a feeling is a very abstract process, it's never A+B=C. And mathematically, the use of universal symbols like the golden ratio, the fibonacci sequence or circles lays a foundation of subconscious connection. These are forums that exist inside all of us.”

Murphy’s personal journey—a professional basketball player turned Wall Street trader turned successful artist—naturally plays a major role in the work he produces. Everything from the trauma of 9/11 (as a Wall Street stockbroker, he lost friends and colleagues) to the highly charged atmosphere of playing sports professionally has shaped him as an artist and exposed him to wildly different lifestyles. 9/11, particularly, is the day he pinpoints as the turning point for him as an artist, a moment that made him question what it was he genuinely wanted to be doing with his life. The body of work he’s produced ever since is his answer.

Works by Brendan Murphy are currently on view online and by appointment starting May 11, 2020 through Art Angels LA. The gallerists have additionally created an exhibition preview for collectors with price information.

Brendan Murphy is a world-renowned artist who was born in Bloomington, Indiana but grew up in Providence,

R.I. His artistic career began in New York City, where he mentored under New York’s most iconic painters - Eric Fischl, David Salle, and Ross Bleckner. Their influence is evident in Brendan’s command of color and experimentation with form. Brendan continues to push the walls of creativity beyond the confines of the canvas and has since explored sculpture work, concept pieces, and a wide range of different materials and tools. In doing so, Brendan has developed his own style, a definitively dynamic mix of the abstract and figurative form. Each of Brendan’s works maintain a consistent exploration of color, language, and symbols. Thematically, he explores the interplay of beauty, power, and the need to understand the energies of life. Brendan is particularly inspired by art’s potential to transmit positive energy, and the effect that the positive energy has on society as a whole. Brendan’s talent lies in his ability in balancing these various elements of exploration against the backdrop of his greatest inspirations, formulas, equations, relationships, and the spectrum of human emotion. Brendan currently works from his home based studios in Malibu, CA and Miami, FL. His work is represented in over 600 private collections and can be seen at all of the large art fairs around the world. 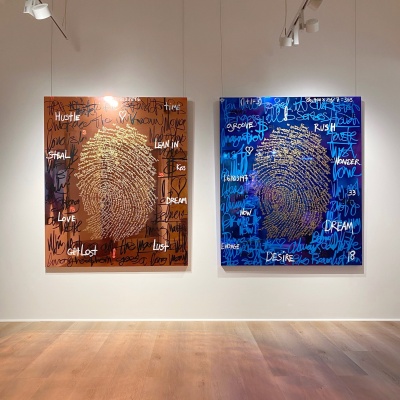 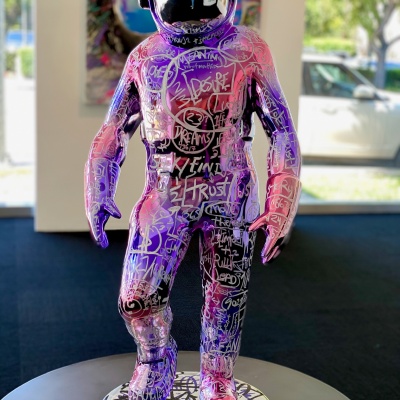 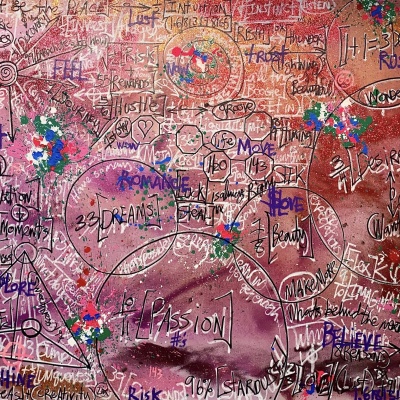